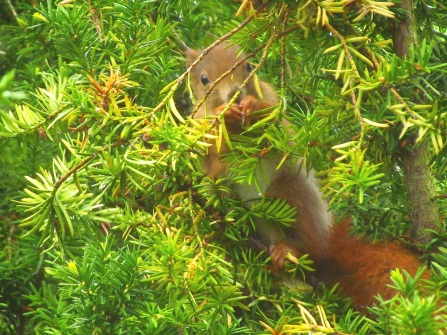 Each morning around 8 or so, the yew tree in the back garden hosts two breakfast guests: a red squirrel and a finch. They don’t come at the same time: they quite thoughtfully leave a gap of about a quarter of an hour between their visits. Throughout the day one or the other may come again, say, for elevenses and for lunch around 1, but without the predictability of one coming right behind the other. Towards the end of day, just before twilight, they both come for their evening meal, again with the same predictable time lag as at breakfast.

What fascinates me is that both seem to favour the exact same branches to dine on. I wonder what they can be eating at this time of year, when there are as yet no red-fleshed fruits to feast on. Both unerringly head for a precise branch: no previous reconnoitering, turning up branches and checking them, as a human forager would do. Both know exactly where their next meal is set. Amazing.

The red squirrel, whom I have named Blondy, as more of a strawberry blond and not as bright red as another that I call Ginger, is a real Fresser (both in German and Yiddish). Blondy and not Blondie, as I’m uncertain as to gender, but Blondy seems like a lad (am I being sexist here?). Extremely agile, he glides from branch to branch and on to the farthest twigs, performing astounding acrobatics in mid-air. I’ve seen Blondy completely upside down, not even hooking his tail for security, as he hoovers up yew yummies. He manages perfect balance, even when to my eyes the fragile twig he’s on could not possibly support him. In contrast, the finch (I haven’t named him or her yet) is more fastidious, or perhaps because there are so few goodies left by Blondy.

I’ve googled to check what they could possibly be eating and the result was —seeds. Squirrels and finches and other birds that dine on yew have learned to remove the toxic outer seed coat to get at the palatable interior. Those who don’t, naturally don’t get to pass on their ignorance to offspring: I was saddened to see a beautiful thrush and a coal tit dead at the foot of the yew last autumn when the yew was overflowing with red berries. However, seeds could perhaps not be the only food item Blondy is after, as I see him almost inhaling lengths of branches, all along the bark.

The yew, however, does not look well. It seems to be ailing, as some branches have yellow and brown needles, and there seem to be more this year than last. However, there are also lots of new growth. Perhaps this is the usual leaf drop at spring, as the new needles come on? The brown needles don’t bother Blondy, as he’s been gobbling at them as well. Could there be some kind of disease affecting the yew? This occurred to me as some trees in the garden —cherry, walnut, and Viburnum— died recently.

Is it possible that a fungus, possibly Armillaria, is causing the yew’s needles to dry up and affects the taste of the bark, and this fungal spicing is what Blondy and the finch find so tempting? No other red squirrels come, but two finches flew in together the other day.  I assume they are related, as they also flew out towards the same direction. From the short video below, Blondy doesn’t seem to be eating just seeds; he’s snuffling something all along the bark. After a few minutes (at 6:34), he stops and his eyes begin to glaze over, as if he’s about to doze off. Then he revives and as he begins to chew what he’s stored in his mouth, his jowls quiver. Is he having some kind of hallucinogenic high? I shall have to take a few samples of the yew to Plant Pathology at the University of Bonn to find out. Whatever the cause, Blondy and the finch are the highlight of these late spring and early summer days. I feel privileged to have a grandstand view.