The European jay looks nothing at all like its American cousin. It has a tawny beige body that becomes slightly russet, especially around the head, in the colder months – the better to blend in with foliage at this time of year I reckon. But to make up for this somewhat bland outer plumage, it hides such a gorgeous flash of blue under its wings. A dash of black and white shows up the blue to perfection, punctuated by a spot of vivid russet close by. Such a magnificent creature and one of the bigger birds that visit the garden! The biggest is the magpie.

We’ve put up suet balls for the smaller birds – the tits and wrens and robins and blackbirds. But three jays – oh such lovely greedy darlings – came yesterday and feasted on one suet ball. Normally the European jay is an extremely wary bird and rarely to be seen close to the house. But ever since we’ve put out the peanuts and suet balls for the smaller birds, I’ve been seeing it more often.

At first only one used to come – it seems to be the alpha male. Why do I think so? Because when one of the others is eating, it doesn’t wait — it just flies in without a by-your-leave, and the diner meekly surrenders its place at the “table.”

In the beginning, the jay would not immediately swoop onto the suet ball though. It would perch on the yew and patrol the surroundings very thoroughly. Once assured that all was safe or perhaps once it had an imprint of the layout of things in its surroundings, it would land next to the suet ball, take one peck and at once turn its head to all directions, surveying the area thoroughly again before taking another bite. As soon as it detected the slightest change — a flicker in a background shadow or difference in light, it would be aloft.

Amazingly, it seems to have now gotten used to us — that is, as long as we’re inside the house behind the windows and take care not to make sudden conspicuous movements. Yesterday it spent a good half hour at breakfast on the suet ball — giving me sufficient time to take a few photos. I had set up the tripod earlier upstairs and thus had a good vantage point. But even more amazing: it was joined by two other jays, waiting their turn at the suet ball: one pecking at the grass and another patiently strolling close to the alpha male. Perhaps they’re one family. Three jays all at the same time – so rare and what a lovely way to begin the day! 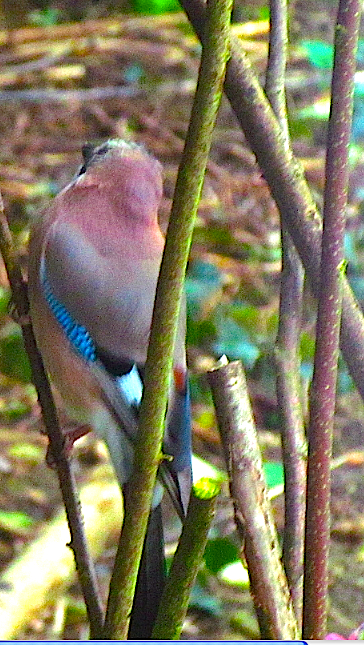 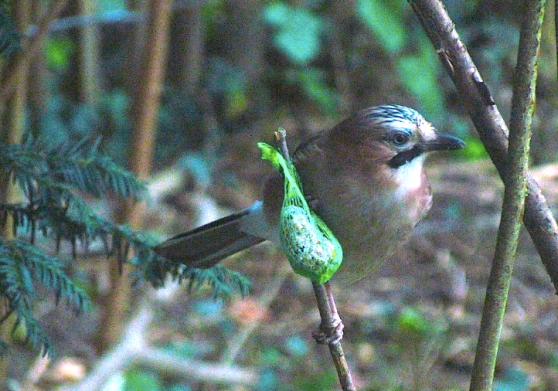 I am thankful for these splendid creatures that come and visit my garden. It is one reason I hesitate to get a cat, even though I do so adore cats. I’m willing to be without one at this point to be able to enjoy these intermittent but oh so delightful visits.

The crow is back on its perch on the fir – earlier it was on the birch, rather unusual. Perhaps it wanted a change. It’s flown away now. The suet ball that the jays liked so much yesterday has all been eaten up and the net hangs limply. Earlier the jays were nowhere to be seen, but as I write this, one has just come to investigate the state of the breakfast “table.” Disappointed, it has just as swiftly flown away again, no doubt to report to its family the rather slackening meal service here. Time to replenish my garden guests’ winter fare.

Other things to be thankful for: a Christmas do, beginning at the Christmas market downtown with mulled wine, then off to a pub for tapas from Der Spanier. Meaningful discussions with a new acquaintance who had read a lot about agricultural and economic development in the Philippines (rather unusual and quite gratifying!); a conversation with another acquaintance on the textile culture of Central Asia and research on wild walnut trees in the Tien Shan mountains — perhaps the original garden of Eden, as it is where wild fruits such as apples and apricots and peaches are known to grow, and one of the places I would dearly love to investigate. Food for thought, as well as the body and soul!  Many thanks, indeed!