Today was a perfect day for a festival – a warm and sunny autumn day, and as tomorrow is also a national holiday, there was plenty of time for fun – gastronomic and otherwise.

The star of this festival is arrossejat, a rice dish typical of fishing villages all along the coast of the province of Tarragona. Traditionally it was a very humble dish, making use of the odd fish and seafood in a fisherman’s catch left over after the best and biggest items have been sold. The word “arrosejat” comes from “rossejar,” to toast till golden, which describes the colour of the rice in this dish. I’d only ever read of this dish, and so was quite keen to see how it was prepared. Fortunately, there was a competition for the best arrossejat, and several aspiring chefs, of all ages, started their charcoal fires just after 10 this morning. Please click on each photo to enlarge. 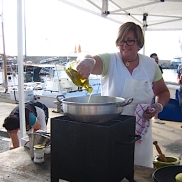 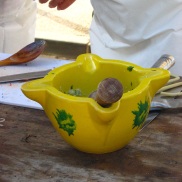 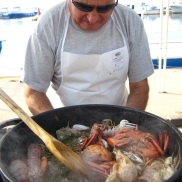 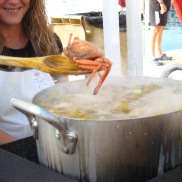 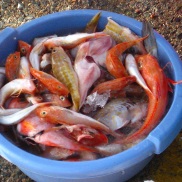 The first step is preparing the broth. Various crustaceans –- mantis shrimp, prawns, crabs – are fried in olive oil till they turn red. I noted one chef using a very green olive oil, obviously home-pressed. Then a picada – a mix of garlic cloves, paprika, parsley – is prepared in a mortar. Once the crustaceans are done, they are pressed or cracked with the pestle, the better for their flavours to be extracted, and together with the picada, added to a cauldron, water added, and all is brought to the boil.

A mix of diverse coral fish are then added. Once all the flavours of the fish and seafood have been thoroughly transmitted to the broth and concentrated through further cooking, the broth is sieved, and used for cooking the rice.

Before the rice is cooked however, it is fried in olive oil until toasted to a golden turn. When the rice has absorbed all the flavoursome broth, the dish can be served as is, or finished for additional “toasting” in the oven.

I had hoped to be able to taste some of the competition results, which smelled heavenly and so temptingly, but only the judges were able to do so. Alas.

Tasting tickets, at a reasonable 5 Euros each, included a dish of arrossejat served in a traditional glazed dish, a choice of octopus in tomato sauce or fried battered fish or a braised fish dish, and 2 helpings of wine (any from 3 local vintners, including cava both natural and rose, regular white and red wine) or beer.

I found my portion of arrossejat a bit lacking in flavour and rather overly toasted and dry. The octopus, though, was tender and tasty, and so was the fried, well-seasoned fish. In other places, arrosejat is apparently served with allioli (garlic mayonnaise) and portions of fish from the broth.

Tender octopus in tomato sauce, arrossejat in the back.

The meal was followed by a demonstration of castellers, and this was quite a spectacle indeed. The most impressive part was seeing children, no older than 5 or 6, climbing fearlessly and agilely up to the top of these human towers and nonchalantly sliding down to be caught up in the safe arms of proud mothers and fathers. I shall post photos of the castellers in a later post.