My splendidly blooming amaryllis reminded me of one of my mother’s pot plants — pink lilies that she doted on and called Lirio (Sp. ‘lily’). They could have been pink belladonna amaryllis, but the belladonnas that I’ve seen have a different petal shape – they turn up their tips like sultan’s slippers, much like the sensuous curves on my amaryllis.

But the petal tips on my mother’s stately lily were different in  my memory. It’s a pity I never remembered to ask her, and now that she’s gone, it’s much too late to ask. Alas. Perhaps they were actually hippeastrums, and this one in the photo below has a familiar colour, though the petals are unlike my mother’s Lirio. 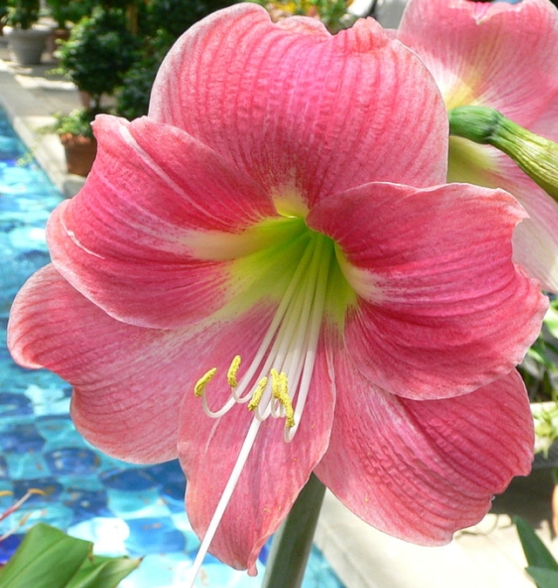 Each time the Lirio‘s spathe (the leaf-like blade that encloses the flower buds) opened, my mother would eagerly count the buds peeking from within. And unfailingly each year as if responding to her infectious delight, the lily’s flowers steadily increased, until one year there were twelve in one cluster! We feared the stem would collapse, but it didn’t. My mother was in such raptures!

Before that phenomenal flowering, she couldn’t bear to cut any of the lily’s flowers, but that time, she cut one and put it in a very curious vase – a vase like no other. A clear glass sphere, about 20 cm (about 10 inches) in diameter, which she filled with water. Then she placed one perfect lily upside down in it, clapped the lid over it, and up-ended the sphere so that it rested on its lid. Such a strange contraption – the water didn’t flow out from the bottom. I wonder if that unusual vase is still in the family home.

The other plant whose flowering gave my mother a lot of pleasure was an aster. It was not as imposing as the pink lily with its tiny narrow leaves on thin, wiry stems – quite unprepossessing. But in bloom — it was transformed into a cloud of filmy violet and greeny-yellow stars. Thus its name, aster. Or as my mother called it, Estrella (Sp. ‘star’).

I also have never seen this particular variety of aster anywhere else. In a temperate autumn which is when asters normally bloom, I am ever on the lookout to find the exact one that I remember from my childhood. But I have never found it, much as I have never come across a lily just like the one my mother grew. Or is it because my perception of them as a child is quite unlike what they were in actuality?

As well perhaps these modern flowers are so far removed from the type species. They’ve been bred for size and colour and pest resistance and who knows whatever else, such that the flowers that my mother grew and that I knew a very long time ago are probably only to be found in some long-forgotten garden. Or even perhaps in the wild. Somewhere….

It’s a pity I only became interested in gardening in my 30s. Living continents away, I had not had the pleasure, and more, the privilege, of learning directly about plants and gardening from my mother. When my parents were living in San Jose, California, I was surprised to find Dama de Noche (Cestrum nocturnum) thriving in their front garden.

I well remember as a teen in the Philippines, in the then capital Quezon City, coming home late at night and being greeted by the Dama de Noche and its pale green florets at the gate, its intoxicating perfume mingling with the refreshing coolness of dew. Its scent is only released at night, which is why it is called ‘Lady of the Night.’ How could a tropical plant survive in a sub-tropical environment, I wondered?

That taught me to try and see whether a plant that I liked could survive elsewhere other than what I regarded as its natural environment. I took some seeds from that Dama de Noche and planted them and they germinated and went on to bloom. And it is only now that I realize that I was then moving it from one Mediterranean-type climate to another. And one of my children has been enamoured of the Dama de Noche ever since. I had tried to find a source for it when we lived in the UK, and there are a few nurseries that grow it here in Germany. But Dama de Noche is meant to be grown in a conservatory or a greenhouse, not outdoors. Or if so, taken indoors before the frosts.

On this 96th day of my gratitude journal, I am grateful for the memories of my mother’s gardens and the plants that she adored. And I am ever so thankful that my mother planted the seeds for a love of flowers and gardens in me and my brothers and sister. My friend Gillian once said of me that I am happiest in a garden. Indeed I am.