Anyone who has read Hemingway’s book of the same title would be likely to agree with me that “The Old Man and the Sea” is a lovely name for a fish restaurant. Ideally set facing a marina, it was where we had an exquisite seafood lunch the other day. I have rarely had seafood prepared to such perfection in a restaurant (outside of Japan, that is). And this was by no means an haute cuisine establishment. The children did the ordering: grilled prawns, fried calamari, grilled dorade, steamed crabs. I was hesitant about the crabs – more than a few times I have had them overcooked to a dry stringyness, or if not then they are hardly the best representatives of crabhood. But I was overruled and I graciously acquiesced.

In no time at all a huge array of “little, little things” was laid on the table with a pitcher of freshly squeezed lemon juice. Little, little things are what my family calls the varied salads and preserves and dips that constitute a meze. They come in small bowls and are replenished on request – which reminds me that in Korea they have a similar tradition. Almost half a century ago in Kyongju, I was given fresh shucked oysters in one of these dishes. No sooner had I emptied the dish than another came. And I, being the greedy oyster eater that I am, swiftly scoffed that up and the next one as well. I must have had over a dozen oysters altogether. I was to ruefully repent having been so greedy. I remembered passing by the street behind the restaurant earlier that day, and saw a woman cleaning the oysters outside right on the street in, shall we say, not the most salubrious of conditions.

But back to meze — every eating place has its own particular combination of these amuse bouche. They are a constellation of the stars of Middle Eastern home cooking. Over the past week I have not had the same appetizer repeated in any of the places we’ve been. Or if the ingredients were the same, the taste definitely was not. My favourite of the month is finely chopped fresh flat-leaf parsley and mint spiked with garlic in olive oil and lemon juice – tabouleh without the bulgur. I know that sounds so plain and unexciting. But absolute freshness is key. And that is perhaps the secret to all of these tiny salads. Put any kind of green herby leafy dish on the table and the Southeast Asian in me — or to be more precise, the Ilocano in me — will be unable to resist. A green leafy dish is to a Southeast Asian what a red flag is to a bull. No else was as interested as me in this emerald green delight.

At another unprepossessing place we called The Garage, being as it was annexed to a petrol station, we got to sample some unusual little, little things. Most extraordinary were pickled baby aubergines, slit in half, like huge red-purple grapes; perfectly ripe tomatoes, peeled (unusually!) so that their pink flesh showed off the tracery of their delicate veins as they glistened in their dressing of olive oil and lemon juice with parsley. One companion’s favourite were sweet carrot coins in lemon juice – so simple and plain, yet so more-ish in their crisp texture that complimented the soft and unctuous texture of the other salad dishes. And the natural sweetness and acidity of the dish was a refreshing contrast as well.  We praised that one so much we got the second helping in a larger bowl.

I had to remind myself not to fill up on these supporting stars to leave room for the main attractions. And when they came, they did not disappoint. The calamari were tender inside their light coat of pale batter, almost tempura-like though not as crisp. The prawns were grilled to perfection – they had retained their sweet moistness. The dorade had been split in half and brushed with olive oil before grilling, and it was also prepared with due care to leave its meaty white flesh tenderly succulent. And the crabs? They were exquisiteness itself – juicy and tender and oh so sweet. I’m glad the children insisted. I used the skewer that came with the grilled prawns to fish out (pardon the pun) every last bit of succulence. The only special seafood cutlery provided was a cracker – one’s own fingers are meant to suffice. Nothing but nothing can compare with a perfectly prepared fish and seafood feast. Tiny crisp-fried pastries drenched in honey and rosewater came with cardamom-scented coffee to end this splendid repast. The only thing I can cavil about is that the coffee came in tiny paper cups. Coffee needs a ceramic surface of just the right thickness for the lips and tongue to savour it properly. Paper just doesn’t do it justice. A walk around the marina and the old town and market to expend some of those calories was followed by “proper” dessert — artisanal passionfruit sorbet and an extraordinary caramelized olive ice cream. 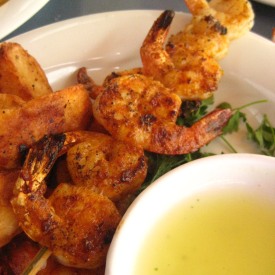 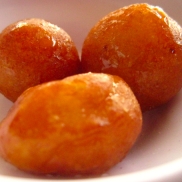 A splendidly memorable day filled with a great many blessings — the utmost of which was having family together and being able to breathe in that seaweedy, salty scent of the sea.  It is a scent that reminds me of my grandmother’s beach and which always takes me back to childhood summers by the sea. For all of these I am deeply grateful. Oh, and for the praying mantis – strangely beige — that hitched a ride with us too.