Among the dessert offerings in restaurants here in the Lower Ebro, known locally as Baix Ebre (‘x’ is pronounced ‘sh’ in Catalan), there is one that I have grown quite chauvinistically addicted to, not because of any leaning one way or the other to the Catalan campaign for autonomy, but because of its unrivalled superiority over any other Spanish dessert I have tasted locally over the past three months. I am speaking of the pride of this staunchly patriotic region — crema catalana — and right the Catalans are to be intensely proud of it.

Although I do relish refined dishes as well as any other Feinschmecker, I tend to be even more appreciative of simple fare made sublime, as a result of deft handling by a sensible and, more to the point, sensitive cook, of the humblest and commonest of ingredients. And what could be more common than the eggs, milk, sugar, lemon zest, and cinnamon that go into the making of such a superb delicacy as crema catalana? I also appreciate that it is predictably served in a plain and unsophisticated clay dish.

My curiosity for exotic desserts has been a constant in my past dining, but lately I have come to see the wisdom of a renowned fine diner, who on discovering an excellent place to eat on trips abroad, never seeks any other. Why risk having a less than satisfactory meal elsewhere when you’ve found a place that is so evidently good, she asks? When you have only a few meals to eat in a certain place or within a certain time span, a disappointing meal is indeed a sad waste of time and money. Not to mention the effort of finding and eventually deciding on a place to eat. I feel much the same about local desserts, and so invariably I choose crema catalana. 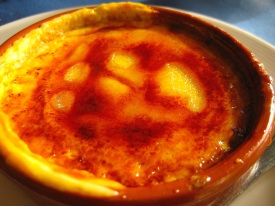 Thus, much as I am tempted by the different local flans – flan de leche, flan de huevo, for instance – I leave the experimenting to M. (I confess to sheepishly stealing a teaspoonful or two, if only to justify my unwavering allegiance.) I beg to be excused another chauvinistic declaration: that the flan de leche as I have sampled here in L’Ametlla de Mar is no patch on its far-flung, exotic colonial descendant — I refer to the Philippines’ signature dessert of leche flan, by far a richer and denser custard. The local flan de huevo was no vast improvement over flan de leche either, contrary to my expectations. 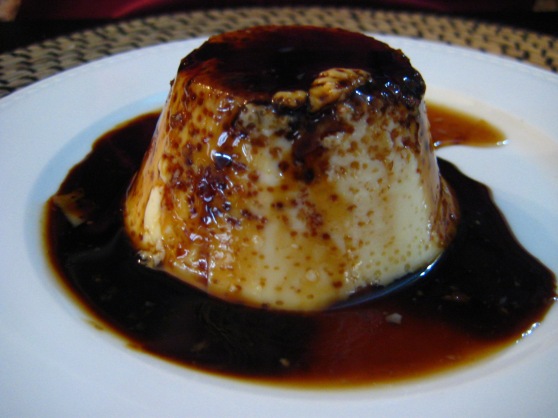 I would rather have a superlative crema catalana and be able to compare which local restaurants excel in it, than suffer the occasional sad consequences of an unquenchable culinary curiosity. (I have to qualify that this restriction only applies  to local desserts, which is probably evidence that my sweet tooth is not as easily swayed as M’s. Or, that the choices have been rather limited.) So far, there are two L’Ametlla de Mar restaurants whose variants of crema catalana have been to my satisfaction. Thank you and saludos, Restaurant Mestral and Café Xavier! It is difficult to say which is superior: both were rich and creamy (despite the absence of cream in the ingredients, only milk), with the barest undertow of lemon and even harder to detect cinnamon (or could it have been an unorthodox replacement of it with mace?). And both were adorned with a mirror-like burnish of burnt caramel in just the right proportion for a welcome crunchiness and smokey, restrained sweetness to counteract what would have been a cloying custard without it. If I may be allowed a slight favouritism, perhaps the glaze of Café Xavier’s crema catalana was more generous and more satisfyingly seared.