I’ve been missing my pond — the pond in my back garden in England. I say “my” but actually No. 2 son helped make it, so I cannot lay complete claim to it; it is his too.

In the early morning, my usual routine was to go outside to the back garden, coffee mug in  hand, whenever the weather permitted it. I would sit by the pond, on the triangular bench with a pergola overhead and trellised sides, slowly taking everything in – the grass, the sky, the trees that sheltered the garden — and take my time becoming fully awake. The sun’s rays would just be filtering through the black bamboo, the early morning light casting reflections of various leaves on the surface of the water. 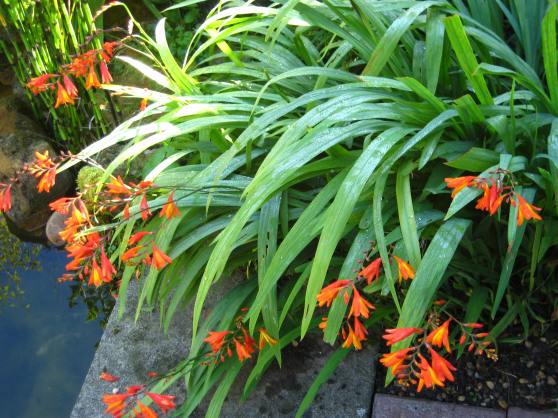 There were no fish in the pond, as I wanted to have dragonflies and frogs, and the fish would have eaten them all at larval stage. The frogs I’d intended as biocontrol against the slugs and snails that loved to feast on my plants, especially newly germinated seedlings. I distinctly remember one whole seed tray of basil plantlets just waiting to be transferred to their permanent positions, and overnight the slugs had partied on them. It was a heartbreaking loss, as it was my first time ever to sow basil. At first I used slug bait, but once we got Morgaine the cat, I decided to forego all garden chemicals. And thus the frogs, and thus as well, the pond — for the frogs to breed in, that is.

The first summer after the pond was finished, a grass snake took up residence in the composter. It would go for a morning swim just when I was sitting there too. And until I and the entire neighbourhood had determined that it was a harmless grass snake and not an adder, I was rather reluctant to continue my early morning routine.

The children were elated however — wow, our very own grass snake! And I began to hesitantly congratulate myself too, because having a resident grass snake in English naturalistic gardening circles is the ultimate accolade. Apparently it is only when a garden feels safe (i.e., no chemicals used) and there are plenty of hiding places (translate to grass kept longer than 5 mm) will rare wildlife, such as grass snakes, make their home there.

The adder is the only venomous English snake and rare as far north of England as Warwickshire. However, global warming might have caused it to expand its territory, explained the budding naturalist son of a neighbour, rather a bit too enthusiastically when he saw faces turning green at the thought of an adder on the loose in our gardens. Even when the entire neighbourhood had established that it was indeed a harmless grass snake from its markings and likely the same one that had preyed on the goldfish in another neighbour’s pond (for which a couple of herons had been blamed earlier), I decided it was better to keep some distance between me and the grass snake. Better safe than sorry.

And how did the herons get out of being blamed for the disappearing goldfish, you may well ask. Orange peel. My neighbour next door thought some schoolkids had thrown litter onto her back lawn (our houses border on the playing fields of the primary school, you see). On coming closer to clean up the offending peel, she unwittingly scared a snake who rapidly slithered away, leaving behind not orange peel, but a goldfish — dead alas.

For some time after that, I sensibly wore gardening boots (locally called wellingtons or wellies for short) even when it wasn’t raining, especially when giving the box hedges their annual trim. For over a decade, I had encouraged those box plants (none taller than my mid-calf) to grow to over shoulder height and thicken up to be shaped into clouds. I used to take a good hour or more to do this, and the hedge had grown so dense and dark, that it made a good hiding place for snakes, grass or otherwise. Just recently I read that although grass snakes are not venomous, bacteria from their bite are liable to cause nasty infections. Just as well I’d been cautious back then.

When the grass snake went for its early morning swim, no doubt it was having breakfast too, as there were no more tadpoles or frogs to be seen. One afternoon, I saw not one but two grass snakes! Oh dear, I thought. Despite my wish not to discourage the children’s interest in wildlife, I was and still am rather frightened of snakes. However the other snake turned out to be just shed skin. This trophy went to join the other natural curiosities found underneath the house eaves — delicate nests that wasps had fashioned from layers of vari-coloured clay.

The following summer, there were new residents in the pond — newts! Unlike the grass snake, I was completely happy about the newts. I had been hoping our pond would get some. I’d envied the one in a neighbour’s pond, which they said had just come one day. Our pond had well over 20 newts, counted meticulously by No. 2 son.  My coffee mornings became quite exciting, as I eagerly awaited Mama or Papa Newt surfacing for air while I sat nearby. Below you can see a baby one, resting momentarily above a beige cobble. By this time, the grass snake had moved on. Perhaps it did not like newts, as they are toxic.

From midsummer onwards, the yellow-orange Montbretia and its close relative the red-orange Crocosmia ‘Lucifer’ would bloom together with the purple loosestrife and mauve phlox – a true riot of summer colour. I had never imagined that orange and purple would harmonize together until this accidental combination. I had placed the Crocosmia surrounding the pond, because I thought their leaves would look good arching over the water. Little did I know then that theoretically orange and purple are complementary. I love these felicitous colour discoveries learned from gardening.

I had planned on a pond here in my Bonn garden. But time has run out on me. And besides, in the three years we’ve lived here, I have yet to see a single frog or toad, though there are slugs aplenty. There have also not been any butterflies other than the small yellow cabbage ones. This is rather unusual, considering that my garden is surrounded by woods with blossoming trees. I’ve taken to wondering just how many chemicals my neighbour uses in her perfect garden.

I suppose it is fitting that I am contemplating leaving my garden just when it is coming into its own. When we moved in three summers ago, the garden was choked with weeds – in the back, stinging nettle and brambles stood well over 2 meters and formed an impenetrable mass. In the front, construction work had gouged out all the topsoil, and goutweed and bindweed strangled the all-but-moribund roses.

I could have had someone else take care of it. But I looked upon this unpromising wilderness as a challenge. And, more importantly, as a gym – my very own green gym. Rooting out stubborn and deep weed roots, digging in garden compost, trundling a heavily loaded wheelbarrow – these have constituted my daily exercise. And the beauty of it is that it was all spent outdoors, blessed with fresh air and sunshine (hmm… rarely) and drizzly rain and mist, and graced with the company of a resident cheeky robin and serenaded with birdsong. And over the many hours outdoors engaged in this very enjoyable toil, I had in my mind a picture of Okuyama-san, my mentor in Yuzawa, Akita in Japan, and his daily routine of 2 hours before breakfast and  2 hours again before supper of garden work.

I also rejoiced in being able to bring a benzine-powered lawn mower to life. What a triumph for me to overcome my fear of starting one of these engines! Though I admit, an electric one or, better still, a cordless one would be my preference. I guess I am a gadget lover at heart – and I am rather pleased with my cordless weed whacker.

Here are some results of my efforts. Not perfect, but such an improvement over the bramble-and-nettle wilderness of three summers ago. And to top it all – we’ve had the reward of gorgeous flowers with their infinitely varied forms and colours and scents!

Not to mention the incomparable experience of feasting on home-grown artichokes. And as well seeing the look of surprise on passers-by when they ask what the huge flower buds are that look familiar (but they cannot place them) that are growing in my front garden. Artichokes?!!! In Bonn?!!! Yes indeed. The bounty of nature — as Okuyama-san so often intoned.

I mustn’t forget to include the companionship of Frau Grau, who tends the spinney that adjoins my back garden. We have spent hours chatting over the fence, about all sorts of topics — from the use of kaolin (Heilerde) for the runs and Echinacea (she pronounced it the German way, which stumped me initially) for colds. And I have been blessed with her cherries and plums, freshly picked from her trees. And I have given some of them to her back, bottled as jam.

For all of these blessings and the joy of tending a garden from untamed wilderness to (slightly) tamed wilderness (I prefer my garden to be a bit on the wild side) —  I am deeply grateful.

The rhododendron has had an extended bloom this year — obviously liking the company of the bamboos. 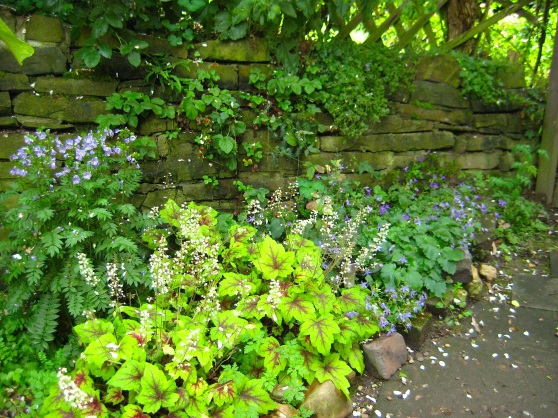 There was nothing here in this space by the back gate three years ago, and now moss (encouraged with doses of yogurt and buttermilk), wild strawberries, and ferns and campanula adorn the granite stone wall. And in the small patch below, more campanula, Heucherella, and blue-flowered Jacob’s Ladder are blooming, spangled with the fallen petals of the jasmine-scented Philadelphus.

One of the bamboos, surrounded by soon-to-bloom daylily and Crocosmia “Lucifer.” Despite the moles and voles tunneling underneath, this bamboo is thriving. Unlike the other two in huge tubs, this one is in the ground and staying behind.

Geranium Rozanne — so generous with its blue flowers all summer long — and multi-coloured and perfumed Sweet Williams. 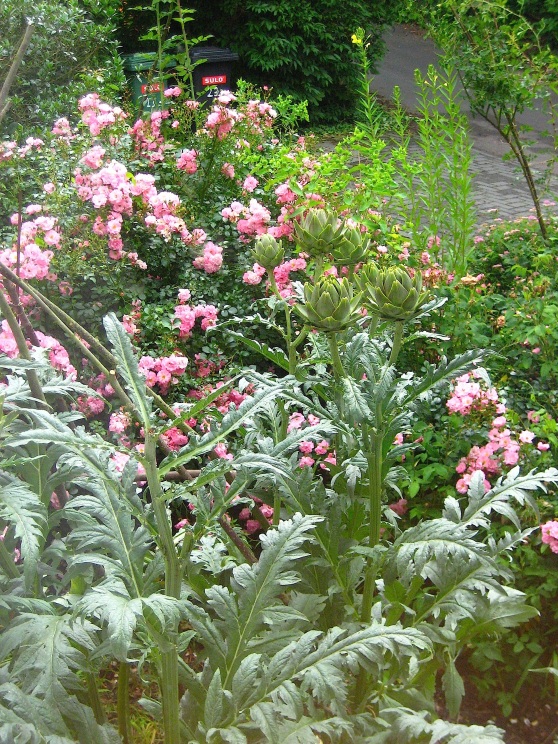 The artichokes that caused an elderly gent on a bike to get down and pause the other day, curious as to what it was. Multiflora roses and a volunteer (self-sown) evening primrose (the tall, pale yellow flower behind) are its companions.

One of the experimental artichokes at the back — of 10 planted, 9 survived the past winter without the protection of a warm wall. We ate the largest bud the other day, roasted, slathered with olive oil, Spanish-style (alcachofas al horno) and dipped in lemony vinaigrette — it was nutty and took well to roasting. Much better flavoured than the ones that had grown in front, warmed and cosseted over winter by a South-facing wall. I wonder whether the truism holds here — of fruits, in this case a flower, tasting better and with more character, because of adversity. Hmm…

And my favourites — the hydrangeas. Now coming into bloom. They were blue, but are now turning pink and purple despite bi-weekly doses of aluminium sulphate. Whatever their colour, I adore them! 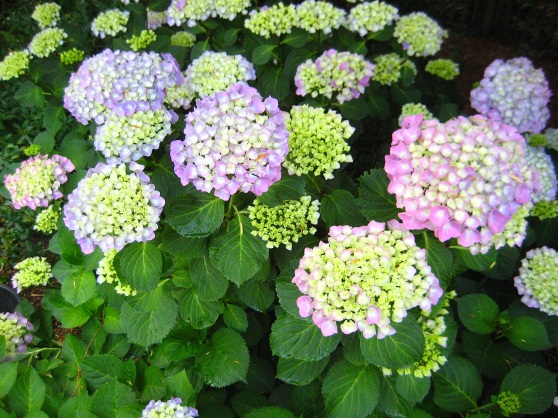