In The Vein of Gold – A Journey to Your Creative Heart, Julia Cameron suggests an Artist Date: a once-weekly date with yourself. This date need not involve “high art,” she says, as long as it involves exploring new places, events, things that you have never encountered before. All this novelty is to feed the creative well, and that is why she suggests going alone.

Yesterday my Artist Date was to the Bonn City Museum (Stadtmuseum). I’ve been meaning to go there so many times – it’s a tiny place – but of course in the usual case of places that are just at one’s doorstep, I’ve put off going again and again. But determined to truly make a balance between life and work — after an intensive effort at a new project, I was definitely more than ready to prime my creative well.

Tucked just behind the admin offices of Bonn University’s main buildings on Franziskaner Strasse, the Stadtmuseum is so easy to overlook. This whole area is truly a Bonn backwater, unless you are a Humanities student or work at the Uni admin. But first I thought I’d have a little snack first. Should I have dim sum at the lovely authentic Chinese resto just across the rococo wedding-cake structure of the Old Town Hall? Hmm…I didn’t want to take too long and what I really wanted was an empanada. Or a small meat pie – something I could hold in my hand. A stroll through the food stalls at the open-air market in Marktplatz of course didn’t turn up any empanada, though there used to be a stall selling paella and other Spanish goodies. Lentil soup? It was quite popular, judging by the number of young ladies enjoying it. Not quite it for me, though a possibility. And just as I turned the corner, not far from the old cinema now converted to a mega bookstore-cum-curio shop by a national chain (you can tell I don’t really enjoy their blatantly commercial thrust), I saw a chalkboard saying “Toasties.” And its high stools were enclosed and thus sheltered from the chilly winds. Perfect. And a cup of cocoa would be nice with it too.

“How is it?” The stall keeper asked in German as I sipped my cocoa.
“A bit too sweet. Perhaps you could add a bit more hot water?”
“Sorry I can’t, it comes ready-mixed in this machine. The chocolate is from Suchard.”
Somehow I detected a familiar lilt in the way he spoke, so I asked, “Sind Sie aus England?”
And he said, “Ja.” It was the first time anyone had guessed right, he said. Most of the time people asked if he was from the Netherlands.
And then of course after he said he was from Liverpool, there was no more need to continue chatting in German.
And while waiting for my toastie of cheese and ham with rucola and tomato and onion and remoulade, we spoke nostalgically of English Christmas fare, such as plum pudding and Stilton cheese. He went on to mention Dundee cake, though that was more a New Year cake. Marmite – he hates it, ditto with the Ozzie version called Vegemite. But it’s a love-or-hate thing, as the Marmite commercial says, and unlike him, M and I do love it. He’s got a friend going to England this weekend, and he gave him a list as long as his arm to bring back. Self-raising flour – you cannot get it in this country, he said.

Can’t you make your own – mix your own baking powder with flour? I said, incredulous.

Cannot get the mix just right, he said. Always manages to taste of baking soda. Did I know of the English shop in Friedensplatz?

Yes, I said I did. I was just about to go and get a box of Christmas crackers. They really need to do some explanation for it, I said, as people might think it is something to eat. After all “crackers” are usually edible. Most non-Brits would not know they are a traditional accessory for the Christmas table – a paper hat, a joke (usually a bad pun), and a little novelty item. And you’re supposed to pull at them to set off the mini fire-cracker inside.

They’re pricey, he said, referring to the English shop on Stern Strasse.

Yes, but at least you can get Marmite and oh, very mature cheddar. And pork pies too. Hmm… that could’ve been a substitute for empanada. Well, good to keep in mind. And they’ve also added a small section with books.

My toastie was really lovely, and I told him so, and so comforting on a chilly day, and good with the cocoa, though a tad too sweet for my taste. I was amply fortified for my Artist Date and I bade him good day, as he did me.

The Stadtmuseum is a tiny treasure house that takes you from Bonn’s early days as a Roman colony up to the end of World War II. There were displays of aristocratic and bourgeois rooms, as well as of traditional shops, hairdressers, and dressmakers. But the best displays, I thought, are of the hand-painted porcelains, once made by three local ceramic firms. Makes sense — as there is no dearth of clay around my neighbourhood. My garden soil – full of huge clumps of fine grayish-beigeish clay — attests to that, and I once thought that pottery would be a much better hobby than gardening. Instead of my bringing in tons of topsoil to garden properly, why not use the underlying and abundant clay to make pots instead? So yes indeed, someone had much the same idea centuries ago, and in Poppelsdorf there used to be a huge ceramic factory manufacturing all sorts of porcelain and stoneware.

The enormous vases, exquisitely painted with orchids and peonies and hydrangeas, were really striking. There was even one with blue Himalayan poppies! Amazing true-to-life botanical art. What a shame the factory shifted to sanitary fixtures – possibly because the skilled botanical painters had all disappeared and I have a conjecture precisely where to in the late 1930s – and the factory eventually closed down in 1956. I asked at the information desk if there were still remnants of the ceramic factory left, and she said there is, not far from the Bonn University student dorm. I shall have to go take a look one of these days.

As I came out of the museum, I walked past two small eateries. One called itself Iss Dich Glücklich (“Eat happily”) and the other was a Korean place called Mandu. The first featured Persian dishes, and me being ever the adventurous diner, I looked forward to discovering what Persian delights — a rarity in Bonn – awaited. We had tried other Korean places in Bonn, and M had tried Mandu before.

M joined me for supper, and we had Fessendjan (chicken stewed in a pomegranate and walnut sauce) and a subtly spiced yellow lentil, aubergine and lamb stew, called Gheimeh Bademdjan, both with Persian saffron rice. I had a wonderful aromatic Persian tea, scented with rosewater and bergamot with a fresh mint leaf. They were all out of dugh – the Persian version of indian lassi or Turkish ayran (yogurt drink), as our waitress said it was made fresh daily and when it was gone, that was it for that day. There was a small blue-and-white dish of home-cured green olives in pomegranate juice with fresh pomegranate kernels and walnuts. Truly an exotic taste sensation and so more-ish. I was happy that the spicing and seasoning were done with a delicate touch. We ended the meal with baked apples stuffed with sweetened ground walnuts and almonds served with warm vanilla custard. This was heaven for M who adores custard and for me too, as I love anything with marzipan and ground nuts. This was called Bratapfel mit Marzipan und Vanillesosse, and it was a new offering not on the printed menu, but on the chalkboard. I would come here just for the baked apples and Persian tea for an afternoon snack. They are only open from just before noon to 8 pm everyday except Sunday. 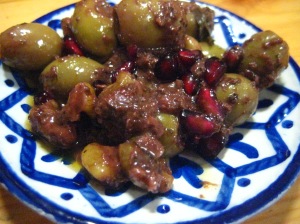 Home-cured olives with pomegranates and nuts 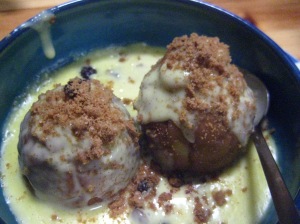 It turned out, when she asked where I was from, that the waitress is actually the wife of the cook; she’s from Bolivia, and her mother Argentinian. How international and multicultural is that? And a good friend of hers, a Filipina, is married to an Argentinian acupuncture practitioner. Well, well!

This side street has a small but diverse group of exotic food places. A sushi place – Ichiban Sushi – one of the first in Bonn, just across the street, with Chinese owners and non-Japanese chefs (at least the last time I ate there, which was a year ago). It is disconcerting when one eats sushi and the chefs do not speak Japanese. But that’s globalization of Japanese cuisine for you. And not far is the Fried Flamingo, a pastry shop and café, with a small deli section of Mediterranean imports (olive oil, etc.), that also does catering. I was happy and thankful that it is still operating, as when I dropped in on it at the beginning of November, it was closed. The lady who runs it is really nice and the pastries are oh so decadent! A pity it closes at 6 pm.

So that was my lovely Artist Date – the Bonn Stadtmuseum with gorgeous hand-painted porcelain from a now-vanished local craft, conversations with a Liverpudlian about British food, and another with a Bolivian woman in Spanish, and the discovery of exotic Persian cuisine right here in Bonn. M and I plan to go through the interesting menu that features the use of dried limes and barberries and pomegranates and walnuts in their dishes. A lovely, multi-kulti day – one that sparked thoughts about food and places and people and pottery, and other things besides. And about creativity and diversity. So much to be grateful for!

Despite being ill with the flu today, I can still be thankful as it is an opportunity for writing letters, and Christmas cards too. Yes – when was the last time you wrote a letter? Not an electronic one, but an honest-to-goodness handwritten one? My dear friend and neighbour in Leamington does not use the Internet and writes me pages with news of my old neighbourhood. I respond using a fountain pen and handmade Japanese letter paper. I managed to find ink cartridges yesterday at Karstadt Department Store’s ground floor stationery shop. So satisfying to get hand-written letters and so I reciprocate. Pity Waterman cartridges only come in one colour, as the Parker ones also come in green. Perhaps it’s time to experiment with non-cartridges? A goose quill perhaps? I’ve got Newton’s artists’ green ink….