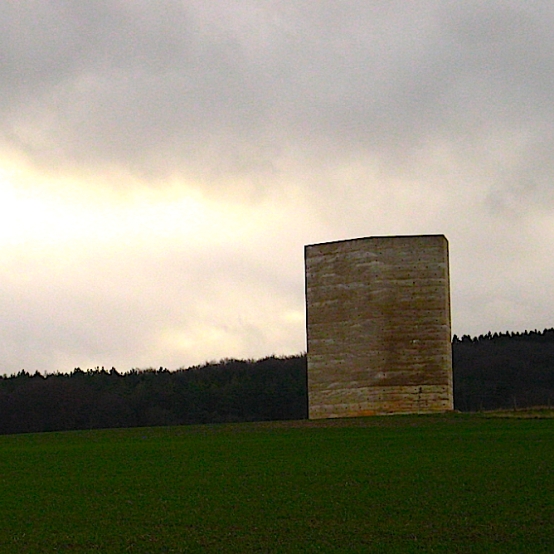 Chapel door from inside

Perforations on wall lined with glass

The beginning of the year was marked by a visit to the Kolumba, a museum dedicated to ecclesiastical art, and the Bruder Klaus Chapel in Cologne, both designed by Swiss architect Peter Zumthor.  Rather typical of us, it took  family visiting from London to introduce us to them. Of the two, the Chapel left a deeper impression, though at first it struck me as unappealing.  It  stood out from the surrounding   fields like a brand-new silo. As we walked towards it, I couldn’t help feeling that the Chapel seemed so out-of-place, like a supermodel stranded in a muddy bog. I’ve always warmed to rural buildings that harmonize with their natural setting: those that blend so seamlessly with the earth or woods around them that they appear an intrinsic component of the site itself.   Once I entered the Chapel, however, its seeming lack of relevance to its environment made sense to me. It is, after all, a sanctuary. And as such, deliberately intended as an otherworldly contrast to the  working farms within which it is set.

The Chapel is renowned for its unique finish and was built by volunteer local farmers using a traditional building technique. Apparently, concrete is laid over a teepee-like frame of over a hundred softwood logs. A smouldering fire is lit within that dries out the concrete over several weeks, charring and contracting the logs. Once the fire has died down and drying is completed, the logs are pried off, leaving their ridged imprint on the set concrete. The interior wall  is left deliberately unplastered, exposing the rough textures and colours created  during the construction process.  Candles illuminate the constrained space (only a few people can be accommodated within) and throw an eerie red-orange cast to the soot-stained and scorched walls. Natural light sparkles like countless stars through hundreds of perforations in the walls lined with handblown glass. The only other source of natural light is an overhead opening that also lets in the elements, leaving puddles from winter rains on the lead-tin alloy floor that looked to me like homely beaten earth.

Both structures are satisfyingly linked to the past and local materials and techniques. As well, both feature perforated walls that allow natural light to create dynamic patterns of light and shadow. The Kolumba Museum incorporates two historic structures beneath: the Romanesque Chapel of St. Columba and a 1950s-era chapel built over the Romanesque one that had been destroyed during WW2.  Wooden decking allows visitors to walk about and view the excavated ruins and the 1950s chapel. If you’re visiting in the winter, it’s best to keep your coat on in this section of the museum.

Who was St. Columba? The only one I have found so far is the Irish St. Columba who lived in the 6th century CE: an indefatigable missionary who converted Scotland to Christianity and also founded the Iona monastery, which in its heyday produced the famous illustrated Book of Kells. I am curious to know whether this is the same St. Columba of the ancient Romanesque Cologne Chapel and what the connection is. There is a Columba Altarpiece painted by Dutch artist Rogier van der Weyden in 1455, believed (though without historical foundation) to have once graced the St. Columba Chapel in Cologne; that is now on display at the Pinakothek Museum in Munich.

The Bruder Klaus Chapel is a private chapel dedicated to the patron saint of Switzerland, as well as of the Catholic Agricultural Youth Movement and the Catholic Rural People’s Movement. A local farmer, in gratitude for a blessed life, commissioned Zumthor after seeing the Kolumba.

The Kolumba is on Kolumbastraße 4, near the centre of Cologne. The Kolumba is closed Tuesdays. The Bruder Klaus Kapelle is just outside Cologne, in Iversheimer, Mechernich; it is closed Mondays (except on religious holidays).